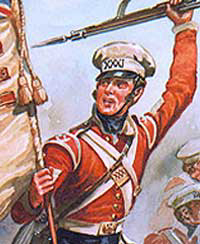 The Best Sergeant was picked by the Senior Warrant Officers and holds the title for a year - A tradition that is carried on by PWRR.

Each year on the 10th February the Regimental Colour of the 1st Battalion was marched through the ranks of the Battalion to the Warrant Officers and Sergeants Mess, where it was held for the day together with the other two colours.

The Ensign, into whose charge the colour was given at the door of the officers mess by the Commanding Officer, was a Sergeant and this unique Ceremony recalled the bravery of Sgt Bernard McCabe of the 31st (Huntingdonshire) Regiment of Foot, (later the 1st Battalion the East Surrey Regiment), during the battle of Sobraon in 1846).

This Battle was the final struggle in a long and bloody campaign to subdue the Sikhs.

During the engagement, a feint attack was launched by the 2nd Division under command of Sir Harry Smith, which involved both the 31st and 50th Regiments.

Both this feint and the main attack failed at the first attempt and it seemed that the battle would be lost. Both the Ensigns of the 31st had been killed as had many other Officers.

Seeing his chance McCabe picked up the Regimental Colour and rushing forward under heavy fire, he planted it on the highest point of the Sikh ramparts.

Seeing this, the 31st rallied and charged forward carrying the rest of the Division with them. The Battle was far from over and there ensued a fearful fight before the Sikhs were put to flight. McCabe was commissioned in the field after the battle, and met a gallant death during the Indian Mutiny.

The Ceremony commemorated a man who was, in Colonel Toby Sewells’, words, "More than twice a hero.” 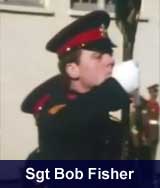